Walk Off The Earth – The Black Flames 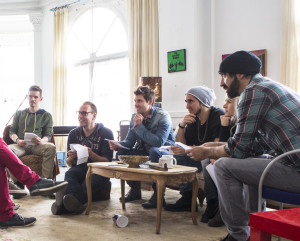 Walk Off The Earth is a Canadian rock band that was formed in 2006 in Burlington, Ontario, and has gained success around the world by making low-budget music videos of covers and originals.

In February 2012, the band signed a worldwide recording contract with Columbia Records. The band is best known for its covers of popular music on YouTube, primarily Gotye’s “Somebody That I Used to Know,” that has to date reached 154 million hits on YouTube, won the YouTube Music Awards “Response of the Year” in 2013 and garnered them a performance on the Ellen DeGeneres Show.