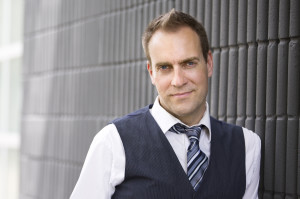 Murray Foster’s life was focused primarily on music before he wrote and directed his first feature film.

Murray was born in Toronto, and attended the University of Toronto, obtaining an honours degree in English. While he was there, he formed Moxy Fruvous with three high school friends: Mike Ford (his future Cocksure Lads collaborator, now two-time Juno nominee), David Matheson (currently playing with Ron Sexsmith, among others) and Jian Ghomeshi.

The four of them started Moxy Fruvous as a lark. The initial idea was simple: busk on the streets of Toronto a cappella for a summer. Once on the street, they added a theatrical element to their songs, starting many of them with short skits.

After three years, they decided to become a ‘real’ band – to start playing clubs and go into a studio and record some songs, which they did in the fall of 1991. Things moved quickly after that – by spring 1992, their six-song independent cassette had topped the Canadian charts and sold 50,000 copies, the first-ever independent release in Canadian history to go gold. In the summer of 1992, they signed an international record contract, opened for Bob Dylan and Bryan Adams, and began recording their first full CD.

Moxy Fruvous recorded and toured for the next eight years, playing almost two thousand shows (including “Late Night With Conan O’Brien”) and selling half a million records, including one gold and one platinum.

The band ended in 2000. For a year, Murray played music in various Toronto bands – and then, in 2001, Great Big Sea asked him to join the band after their original bass player left. It is a position he holds to this day, having played over a thousand shows with the band and recorded five gold and platinum CDs.

Although a musician by profession, Murray had always had a keen interest in writing. Although he dabbled in different forms of fiction, he didn’t start screenwriting until he entered a local short play competition called “Sing for your Supper” in 2010. One of the judges of that competition, Emily Andrews (now one of the Cocksure Lads Movie’s co-producers) asked Murray if her new film collective called Filmcoop could film one of his short plays, called “Doug and Sally.” Murray agreed, and was quickly pulled into the world of filmmaking: in 2010, he directed his first short, “The Art of Mime”, which was followed by “The Picture” and “Bob” over the next few years.

It was during this time that Murray started working on the screenplay for THE COCKSURE LADS MOVIE. Having never thought about making films until four years ago, Murray’s life seems to have been filled with nothing but that since then.