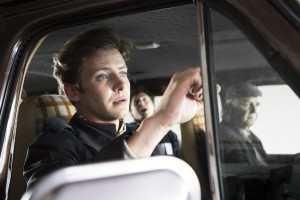 Born in Swindon, Wiltshire, England, Lyndon is best known for his role as soap opera bad boy Nathan Wylde on Emmerdale where he was nominated for “Villian of the Year” in the 2011 British Soap Opera Awards.
Lyndon studied drama, media and photography at Swindon College before moving on to the London Academy of Music and Dramatic Art. In addition to Emmerdale, he had a role on the British TV film Anchor Me, as well as appearances in the television shows Spooks, Robin Hood, and Doctors.
At age 13, Lyndon appeared in the UK tour of The Famous Five. In 2011, he toured the UK in Agatha Christie’s play The Verdict.

“Dusty is a bit of a lout, a bit of an asshole, which is the sort of characters I always seem to play, but despite being a bit of a nightmare, he is the lead singer of The Cocksure Lads. Luckily, as lead singer, I didn’t have to pretend or learn to play any instruments, but it was still amazing to be belting out these mod rock hits in a Northern accent! We did a proper gig in front of around 400 people which was just an awesome, incredible experience. We get this opportunity to fly out to Toronto to try and make it big and crack the Canadian market. When the Cocksure Lads arrive, my character starts being a prat and messes everything up by demanding more royalties. It leads all the characters on a journey of self-discovery about what it means to be a band.  It is very funny, and even if it comes off as just a fraction of how much fun it was to make, it is going to go down very well.” – Lyndon Ogbourne