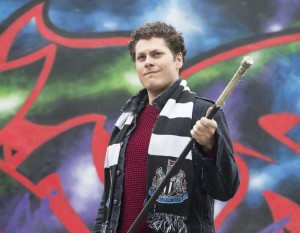 Luke was born in Worthing, England. His family moved to Canada in 1991, and he grew up in Chatham, Ontario. He moved to London, Ontario for University, and then on to Toronto in 2006 to attend theatre school and pursue being an actor.

Luke Marty is a proud member of the 2014 Theatre 20 Emerging Artist Ensemble. He also directed the play Karenin’s Anna in the 2014 Toronto Fringe Festival.

He is the lead actor of the film versions of the Shakespeare at Play App and appears in the online web series Imbrobabilia from Handsome Robot Pictures.

“Luke Marty was extremely excited to take on the role of Derek Millwood in “The Cocksure Lads Movie.” Luke’s involvement in the project spanned a few years, from the filming of a trailer for a short film right through to the development of the feature, and so he has a special bond with Derek. “We had actually gone to events in character before we ever filmed, and so when we got on set it was really just like putting on a glove. Derek likes to see himself as the tough guy, but he’s really a big softie and a secret romantic. He wears his heart on his sleeve and his demeanor is influenced as much by the people around him as it is by his own experience.” Luke found it very interesting to play out “a not-so-obvious romantic through line” for the film, and was thrilled to be able to work with such talented and generous castmates. “Everyone made it so easy to do what we needed to. The cast were brilliant, the crew were supremely professional and gifted in their skill sets – everyone came together to make a wonderful creative community.” Luke’s favourite scenes to film were the music videos, and catching screen time with Alan Doyle. “I couldn’t have asked for a better film for my first major feature. It’s got real heart and is very Canadian (despite being about a British band). I think people are really going to enjoy how much fun it is.” – Luke Marty