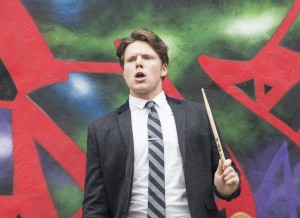 Edward is originally from Nottingham, England, but has proudly been a Torontonian since 2006.

He completed a BFA in Acting at Ryerson Theatre School, and is a founding member of and producer with The Empty Room Collective.

“Is Blakey the best drummer in the world? “Irrelevant,” Edward Hillier says of the question. “To me, this character was not so much that of a drummer with a capital ‘D’, but an incredibly distracted young man who just happens to play the drums.” Hillier plays Blake ‘Blakey’ Manning in ‘The Cocksure Lads Movie’, a character who is rather more complicated than he initially lets on. “He comes across as an idiot,” Hillier admits, “though I personally see him as being the most intelligent member of the band. The reality is, he thinks too much, and sort of functions like a computer running far too many programs at once. That is, slowly.” If he were to pick a favourite scene from the shoot, it would be when the band first arrives in Canada. “We shot that scene on one of our last days of production, and we had really bonded as a band. It was heartbreaking to have to break up, but wonderful to have reached that point.” The film is, in essence, the coming of age story of a band: four young lads who overcome the demons within themselves to take a shot at the big time, together.” – Ed Hillier